What are the precautions for sampling valve？

The precautions of using sampling valve

What should I pay attention to when sampling?

The precautions of using sampling valve

A sampling valve is a valve used to obtain a sample of a medium for chemical analysis. Generally, it is roughly divided into a double opening valve, a flange clamp valve, and a sampling valve with an insulation jacket on the equipment or pipeline.

1. The double opening valve is generally composed of two ball valves, which play the role of sampling safety and achieve the purpose of sampling through linkage in the negative pressure device.

3. Sample valves with jacket insulation should pay attention to the following:

Second, when the valve can not be opened, can not use the method of extended torque arm, forced to open the valve, because this will cause the valve stem resistance is greater and the spool off, or cause stem and cone hole sealing surface damage, resulting in valve damage or damage to the wrench, causing unsafe factors. 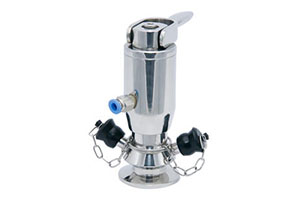 What should I pay attention to when sampling？

2. Determine the sampling method and take the corresponding safety protection measures, such as sampling containers, tools and protective articles, according to the sampling objects and sampling points.

7. If there is condensate when taking process gas, open the condensate discharge valve first, remove the condensate, and then open the pneumatic Sanitary sampling valve for sampling. When taking toxic gas samples, first open the bypass valve to replace, strictly prohibit the gas into the atmosphere, in order to prevent poisoning. Wear protective equipment such as gloves, protective cover, etc.

9. To be familiar with the location and use of the site leaching device, once injured, can get effective treatment in the first time.

11. In the presence of various toxic gases in sewage, it is easy to cause suffocation. Wear personal protective equipment when sampling, and keep a certain safe distance from the pool. To prevent slipping, wear a safety line to sample during rainy and winter months.

12. Most of the sampling sites for environmental analysis are outside the plant, so two people must take samples, monitor each other, and take the necessary life-saving supplies. Sampling points to avoid as far as possible silt, grass, steep slope and other places, so as not to fall into the water.

We should pay attention to safety in the use of sampling valve and in the process of sampling, strictly follow the operation steps to operate, that is, to ensure work efficiency and to ensure their own safety.